The economic development opportunities on reservations that feature predominantly trust land are fundamentally similar to that of large, master-planned land-use programs. 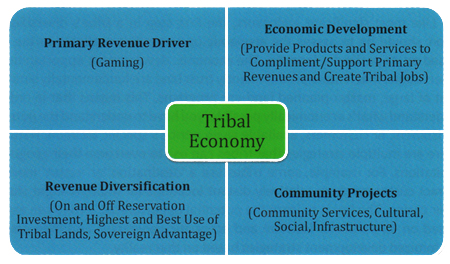 The genesis of Indian Gaming is well-documented in terms of how it was based on the unique and recognized sovereignty of American Indian tribes in relation to their state and municipal counterparts. What began as bingo nights in church basements with an all-volunteer staff, eventually morphed into a $28 billion a year gaming industry. The impact of gaming on Native communities is incalculable and nothing short of miraculous. But gaming is only one part of a multi-faceted strategy to bring long-term financial stability to Indian Country.

Now, more than ever before, it is crucial to continue developing a progressive, diversified portfolio that allows tribes to spread the risk and develop business ventures that will translate into jobs and economic security not only for tribal governments, but also for their tribal members. The ability to provide meaningful, full-time employment in the multitude of fields and professions that are necessary for the day-to-day governance, human needs, education and well-being of tribal members is one of the most important benchmarks for tribal self-sustainability in the foreseeable future.

In the beginning, tribes did not have a lot of managerial or even financial expertise regarding the complexities and sophistication of the gaming industry, which had a global market presence. Most tribes reached out to the industry, primarily in the Las Vegas market, for assistance and entered into Managerial Agreements. Often these agreements included assistance in accessing capital since the tribes had limited ability to secure financing or obtain credit on their own.

Initially, tribes needed government approval of expansion projects, business investments or new business ventures, but today this is no longer required leaving the tribes free to diversify and manage their assets as they see fit.

Today, tribal leaders recognize the fact that they cannot depend on unlimited expansion of their casino operations. They see the finite capacity of casino development, as the revenues have begun leveling off in the last five years. Even the commercial gaming industry in Las Vegas and—in particular—Atlantic City have realized that they need to diversify revenue sources to balance their revenue base if they are going to survive.

So where does this leave the tribes? With an opportunity to learn from their successes and failures and find a path to growth and job creation in their communities.

Faced with the challenge of building sustainable economies over time, tribes across the country are taking steps to diversify their economic activities. Emerging from these efforts are examples illustrating a spectrum of potential opportunities, ranging from traditional gaming-related amenities to initiatives designed to apply other in-house capabilities to the development of successful non-gaming enterprises.

The first step to tribal diversification involves gaining an understanding of unique competitive advantages, the available local and regional economic assets, and where potential new dollars beyond gaming can come from. Armed with this understanding, tribes can effectively deploy the various diversification theories in accordance with their particular goals and opportunities to achieve economic growth. Other areas of consideration include zoning issues, potential land purchases, and taking land into trust, among other requirements. While these are not “deal breaking” impediments, they need planning and cooperative agreements with other governments.

The natural expansion of Indian gaming led to increasing the destination aspect of casinos. Hotels were built to accommodate gamers, but were also used as convention venues for scores of other businesses that were primarily interested in the capacity of the facilities for their meetings, and little to no interest in the casinos. Many tribes also developed golf courses, spas and outdoor recreation areas for their membership, their workforce and visitors. Investments included developing independent small and large businesses on the reservation for tribal members and others.

Like most significant endeavors, the first step in a tribe’s diversification effort should be to assess the economic opportunities available to the tribe based on its particular location. The economic development opportunities on reservations that feature predominantly trust land are fundamentally similar to that of large, master-planned land-use programs. This means that in order to understand what’s economically possible, one has to understand the potential consumers, or customers, available given a tribe’s specific location. Naturally, there are multiple strategies that tribes can use to overcome their geographic limitations. For example, some tribes use a “destination” or “resort” model to attract customers from relatively distant locations for multiple-night stays in their casino. The key is to learn the potential opportunities a tribe can explore based on its particular location and economic geography, and then develop customized development strategies based on that reality.

Most tribes find themselves in one of two situations. They are near a relatively large metropolitan population, in which case they likely have developed gaming ventures to attract nearby customers. Or they find themselves in relatively rural, isolated locations, where gaming operations consequently are based on destination resort models or on capturing customers who travel through or near the reservation on major highways on their way from one metropolitan area to another. Tribes with land along a major highway or interstate are best situated, as they can still establish profitable gaming operations despite being relatively rural. Others find themselves in truly rural environments without easy access to major markets, and likely have small gaming operations typically frequented mostly by tribal members. At best, truly rural gaming tribes can build large destination resorts to which customers are willing to travel long distances and typically stay for multiple nights.

Determining which diversification path best suits a tribe’s particular needs depends in part on its geographical location. Opportunities available to a rural tribe tend to depend heavily on the size of its reservation and the natural resources it holds under trust. Tribes with little acreage usually have to focus on creating service-oriented enterprises that do not require square footage. Comparatively, tribes with vast reservations often contain one or more marketable natural resources that can—if so chosen by tribal leaders—be leveraged for economic development purposes. While each tribe is unique—one can have both rural and urban attributes—it is helpful to break down possible economic development opportunity sets into four categories: tribes near a metropolitan area, rural tribes on high-traffic corridors, isolated tribes with natural resources, and isolated tribes without natural resources.

The options for diversification differ depending on which category best describes a particular tribe’s situation. Recognizing that some tribes have multiple characteristics, the following articles will examine how the economic diversification opportunities for tribes are determined in each category.