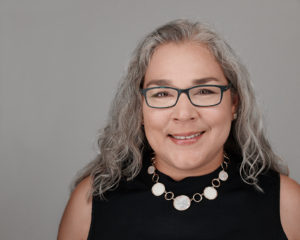 Liana Onnen joined Blue Stone in the Fall of 2018 bringing her vast experience of 15 years working in Indian Country.  She is a member of the Prairie Band Potawatomi Nation and has experience ranging from serving as Tribal Chairwoman to General Manager of Tribal Operations to Director of Housing. Ms. Onnen has served on numerous boards and committees in an advocacy and advisory capacity. Liana has a Bachelor’s Degree in English with a Writing Emphasis from Washburn University. She and her husband Terry have been together for over 20 years and have two sons. Ms. Onnen currently resides in Topeka, Kansas.

Liana began her tribal government career as an Administrative Assistant in the Housing Department, rising to Assistant Housing Director in less than two years. She would go on to serve three years in that position eventually ascending to the Director position, which she held for one year before advancing to the position of General Manager of Tribal Operations. Most recently she completed a four-year term as the Chairperson for the Prairie Band Potawatomi Nation.

While working for her tribe as Housing Administrative Assistant, she became the Office Manager, quickly advancing to Assistant Director of Housing. She would go on to serve in the Director of Housing role for a total of three years. This experience has provided a strong background in Indian Housing including NAHASDA funding and regulations, LIHTC projects, tribally funded housing, leveraging funding, housing assistance programs, housing maintenance management and all aspects of day to day operations of a tribal housing program, including budget and personnel management.

In addition to her extensive experience in tribal housing, Ms. Onnen’s four-year tenure as General Manager of Tribal Operations, provided her with a thorough background in all aspect of tribal government operations, from operating budget planning and management to understanding federal grants and budgeting processes. As General Manager, Liana oversaw all programs under the purveyance of the Tribal Government excluding the tribal court, which is separate per the tribal Constitution, and the finance department (with a brief exception.)

Ms. Onnen’s commitment to bettering her own tribe’s circumstances expanded to a desire to solve the problems that not only impeded the progress of her own tribe, but many, if not all tribes in the United States. Advocacy at the national level began with collaborations with NCAI and NAFOA to lobby congress on taxation and housing issues. Ms. Onnen has testified at the congressional level, twice for the Senate Committee on Indian Affairs. She has also been a presenter/speaker/moderator on several occasions for NCAI and NAFOA, as well as for regional consultations with HHS, and local presentations to community organizations.

A passion for finding ways to make her own community better has grown into a passion for finding ways to make all Indian communities better. Real-life experience combined with this passion have provided Liana with a deeper understanding of the interconnectedness of tribes with regard to tribal issues as well as the complexities of how politics at every level can shape a tribe’s vision, goals, and approaches. It also provided an opportunity to see how Tribal economic development is initiated and sustained as well as how synergy between tribal entities can strengthen economic independence and tribal sovereignty.

Liana has primarily been a lifelong Kansas resident, living briefly in Missouri and Wisconsin during her childhood. She has lived in Lawrence, Kansas City, and Topeka, as well as the Prairie Band Potawatomi Reservation, and briefly attended Haskell Indian Junior College before returning to college at Washburn. While at Washburn University, Ms. Onnen was the recipient of the prestigious Whaley Scholarship, awarded to one outstanding English major student per year as selected by the English Department faculty.  Ms. Onnen has lived in Topeka, Kansas, for the past 25 years. She and her husband, Terry, have been together for 24 years and have two sons ages twelve and ten. She maintains ties to her Potawatomi community through family and involvement in community, cultural and tribal government activities.